So, you read the title and have obviously clicked to read my inner most thoughts on the Wacom (pronounced: “W”- “æ/ə/eɪ/o/” -“com”)* Cintiq Companion 2.
Either that, or my racy meta tags tricked your favorite search engine into a stop off in Dissapointmentville®. Either way, here we are. So let’s talk about the new portable Wacom Cintiq Companion 2.

Confession I: I love technology. Even the questionable stuff.
Confession II: I am platform agnostic. I don’t dismiss options based on personal preferences.
Confession III: As a result, I don’t think Microsoft is the pc devil.
Confession IV: I once stole a caramel from the supermarket and lived with that guilt for years.

I make those confessions so you know that as a designer, I’m not laying naked with my Apple products while thumbing my nose at the perceived ‘corporate greed/band-wagon-hate-train’ of Microsoft. (The irony being quite palpable in the era of iterative iDevices, not withstanding.)

And my last preface, is that if you really wished this product was BOTH cheaper and ran Yosemite, you might want to think long and hard about what you just said before that premium-priced-paradox creates a rift in the space/time continuum worthy of causing the Enterprise-D to encounter the long missing USS Enterprise-C!**

Just Tell Us What You Think, Jerk!

Well, that kind of attitude won’t make me write faster… but for the impatient kids out there, I will say; In short: I really like this little guy. I’d go as far as to recommend it to some folks, even. So, there- go back to your listicles and listicles of cat videos, while the adults here continue on…

Tablet PC’s and Bears, Oh my!

It all began when the evil Microsoft licensed Wacom’s digitizer pen tech in their foray onto the tablet PC hardware scene with the Surface Pro.

The fact of the matter is that Microsoft’s focus on Tablet PC’s helped to create a touch-targeted (and much maligned) OS environment that aimed at the tablet user wanting a full laptop powered experience. Credit where credit is due, as it’s led to some pretty substantial advances in the focus on improving the tech & software for arty folks like you & I. (Most recently, this has led to Adobe’s focus on Touch & interface focus to Adobe Photoshop and Adobe Illustrator.)

As a result or a reaction to their team up with Microsoft on 2 generations of Surface tablets, Wacom introduced their own vision for a professional artists Tablet PC with the original Cintiq Companion in the latter half of 2013…. </end abridged history lesson>

…bottom line…in my Studio I work on a 24hd Cintiq, when I leave the studio with the Companion 2 it feels exactly the same – no compromises.

The original Companion came in 2 flavors with various specs, but an omission of note: the original Companion was unable to act as a normal Cintiq display if/when connected to external devices. (There was an Android version that allowed for this, however, it was an android device. To prove my aforementioned platform agnosticism, I will admit I owned one.) That has been remedied for the Companion 2.

On top of the broader ability of use, the newer generation comes in a wider range of specs and starts the price of entry much lower, while pushing the higher range into customization territory for the filthy rich artists with a penchant for large SSDs and 5th gen core i7’s.

Now for the Review-ish Part

Let me start by saying that I know this tablet is not for everyone. In fact, by virtue of it’s design & it’s designer, it’s only really suitable to a small crowd of professional arty folk. And that’s ok because there are worthy alternatives for the budget minded dabbler.

Why Get a Companion When the 27QHD is Available? – Great question that requires a simple follow up: What is your intended use? Personally, I have a 24HD in the studio where I remain chained most hours of any given day. So my purpose of getting the Companion 2 was to visit the outside world more often and be fully functional to work on any project in the queue. I often have a need to work offsite with some of the pinball projects I’m involved in, so a viable portable solution has always been a goal.

The stand out of course, is the Wacom Pro Pen …with it’s 2048 levels of pressure and tilt sensing sex magik…

– This is a bit subjective, but I personally love the size and think I’d even like one a bit larger. The short version: It’s well constructed, it’s solid, it’s sturdy, and it’s meant to be on it’s stand.

The stand out of course, is the Wacom Pro Pen (with it’s 2048 levels of pressure and tilt sensing sex magik along with sexy hard case and nibs, etc) and the express key setup. The rest is either icing or cake, depending on your expectations.

So, anything that bothers you about the build?  Sure, this thing isn’t light weight. Sure, it has a huge bezel within another huge bezel. Sure, the stand is ‘cheap’ in appearance. BUT – the pen, remember the pen? 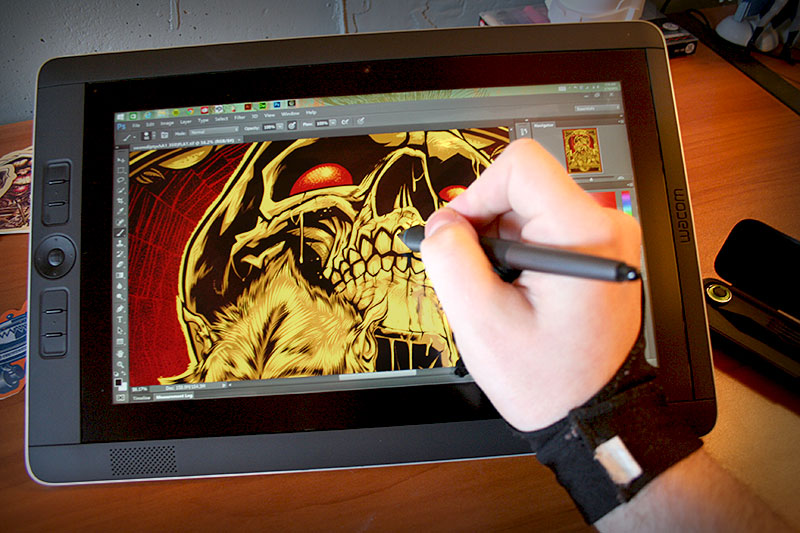 Battery Life
It’s probably going to average about 5-8 hours for me judging by my use so far. I work with larger files (1-2GB files and beyond so far), so I use the upper limits of ram and probably tax the cpu & graphics card pretty consistently. The results of which is the need for the fan to kick up higher more often & draw more power as a result. I might make the argument here that going with an i5 might be better for the sake of battery life alone with a negligible trade off in speed. But as i can’t confirm, I won’t. (Although I kind of did, didn’t I?)

Power
This 2nd gen of the Companion gives you choices on power ranging from an 4th gen core i3, to a 5th gen core i7. As well as 4GB to 16GB of ram, with multiple sized SSD options. And while I could argue most people would be fine with a mid-lower range device depending on the intended use, I can only speak on the i7, so that’s what I will do!

This thing is fast. Even on the ‘balanced’ power setting it’s quick to respond to touch, pen, etc. I’ve used Clip/Manga Studio, Adobe Photoshop CC, Adobe Illustrator CC all using touch gestures and all with ridiculously large and complex files and all with flawless performance every time. I will note others have stated the balanced power setting causing some lag in pen input but I have yet to encounter any of this.

Who Should Buy This?
There are at least 2 audiences for this type of device – 1) those who cook their caviar*** with burning 100 dollar bills, and 2) professional artists who embrace technology and currently use desktops with Wacom tablets and/or Cintiqs looking to work outside of the studio in a flexible manner.

Who Should NOT Buy This?
1) Those who cook their caviar*** with burning 100 dollar bills, 2) hobbyist/amateur artists on a strict budget who think the tools do all the work, and 3) Apple/Mac users who hate alternatives and are afraid of change because of long ago prophecy surrounding “non-Apple-product-usage” and the end of the world.

Why should I listen to you?
You shouldn’t unless – 1) You cook your caviar with burning 100 dollar bills, or 2) You are my children.

But Isn’t The Surface Pro 3 Cheaper and Just as Good!?

That depends on you. But ultimately both are very close in power and approach to interface.

The Surface Pro was designed to replace a tablet & laptop, and as a result of including a digitizer can be leveraged for fantastic digital art. The Cintiq Companion 2 was birthed solely for with a professional artist in mind, so the focus is on the experience to that end.

Personally, had I not been a longtime Surface user and advocate, I might never had gone close to a Companion. In fact, my love of the Surface Pro 3 is what pushed me into the Companion 2.

WHY? Well, I think Ray Frenden makes a great and proper comparison, so I won’t retread. Both are amazing pieces of kit for any digitally minded artist, but the bottom line for me: in my Studio I work on a 24hd Cintiq, when I leave the studio with the Companion 2 – it feels exactly the same – no compromises.

So, that’s my generalized/glossing-over review. If you have questions or snarky comment, leave them below and I’ll try to respond with something equally snarky or questionable!

*Not True – but a safe way to pronounce in front of collegues and friends.
**Snarf, Snarf…
***I am aware you DO NOT cook caviar. That’s part of the irony. It’s a joke, son.

UPDATE: For the sake of full disclosure: I purchased this with my own funds. This is not a paid review or advertisement & I do not even know how to properly say Wacom. I also left money for the caramel weeks later…
Tweet
Share1
Pin
1 Shares