On a regular basis we’ll ask a new sticker artist a series of 10 questions. To keep things simple and to engage in a deeply philosophical, long term case study of the scientifically complicated “Sticker Artist’s mind,” we’ve decided to leave the questions the same every week.

Zombie Yeti is good at life. An extremely talented illustrator, with an insatiable appetite for learning new skills and furthering his creative chops, ZY’s artwork translates perfectly to the sticker medium, where he has printed dozen of custom sticker designs over the years.

In the graphic design world, Zombie Yeti is the consummate pro and can draw like there’s no tomorrow, which has paved the way to successful working relationships with organizations like Microsoft, Adidas, Harley Davidson,  Beats by Dre, Star Wars, X Games, DC Shoes, and Stern Pinball (Holy Shit. Check out his brand new Ghostbusters Pinball Machine at the end of this post!)

His twisted sensibilities and humorous creative approach seems to work particularly well within the music industry as he continues to turn-out custom, silkscreen gig posters for bands like The Melvins, Primus, Mud Honey, 311, Puscifer, Sublime, and too many more to count.

We could sing his praises for  at least one more paragraph, but instead let’s just ask him some questions.. 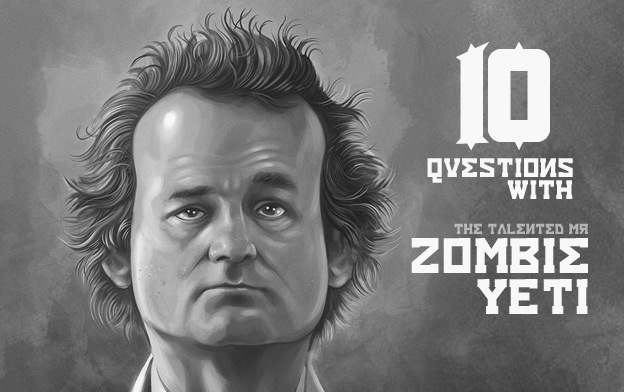 1. what makes a good sticker design?

To begin a sentence with a prepositional phrase and to appear to delve further, I suppose a pleasing color pallet and pleasantly rendered focal image would be the easy answer, but I’d argue the opposite is true as well. If it’s hard to look at, it might be just as eye catching or more so.

Of course, I am also an enormous fan of words and text, so a good message is always fun. Perhaps one of those stickers that looks like the Volkswagen slogan Fahrvergnügen but really if you read closer says ‘[email protected]$kingroovin’ is what I’m referring to.

So, I guess what I’m trying to say is an adhesive backing is paramount! 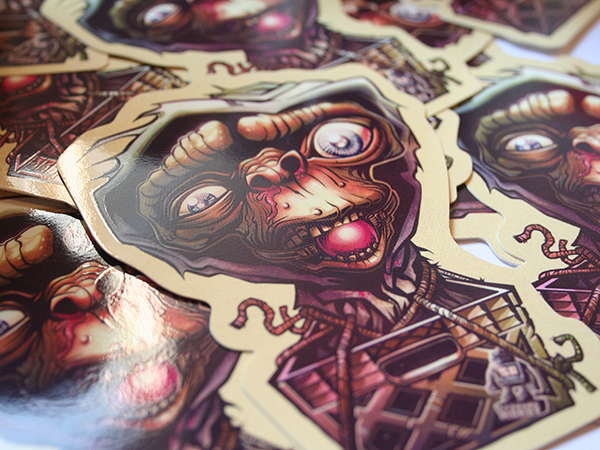 2. what do you do with stickers anyways ?


I like to use that adhesive side to adhere the sticker to stuff. To be dishonest tho, I often don’t adhere them & instead use a killing jar & upholstery pins to keep them under glass like a butterfly. 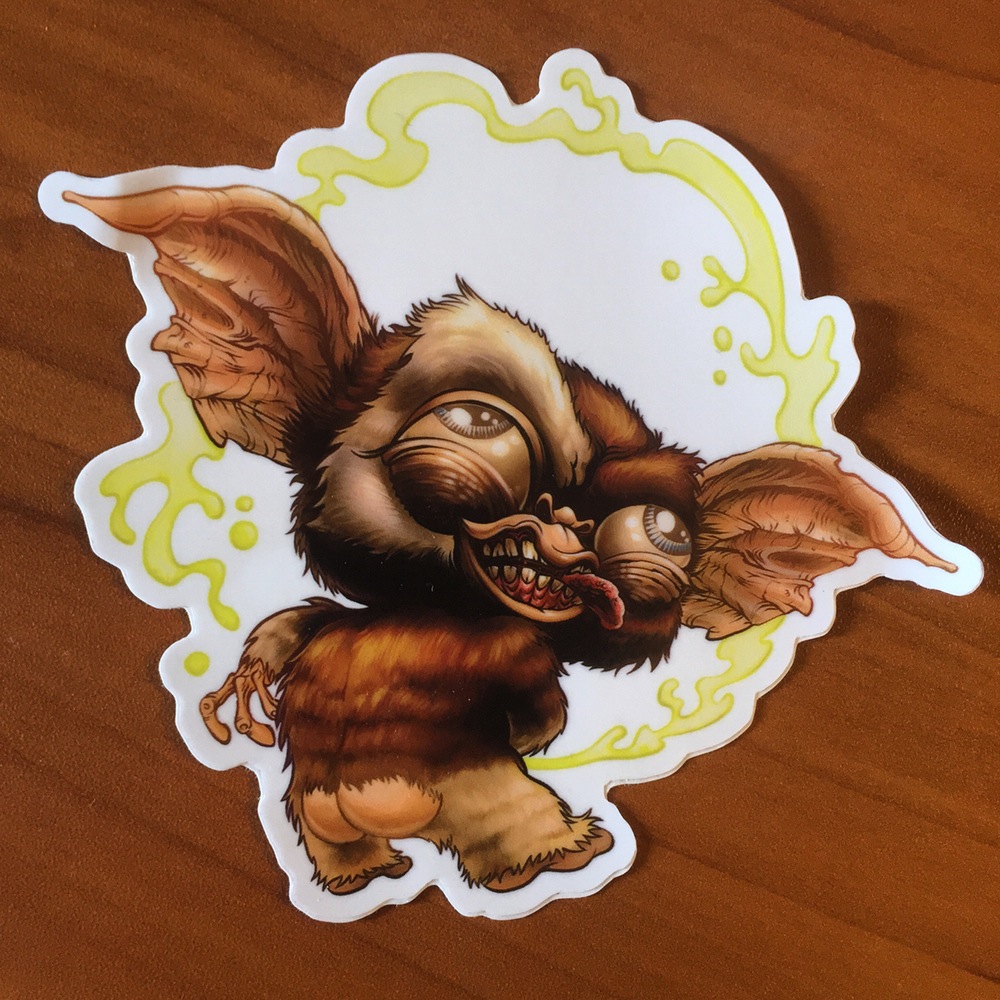 3. if you could hand one of your stickers to any one person, who would it be ? 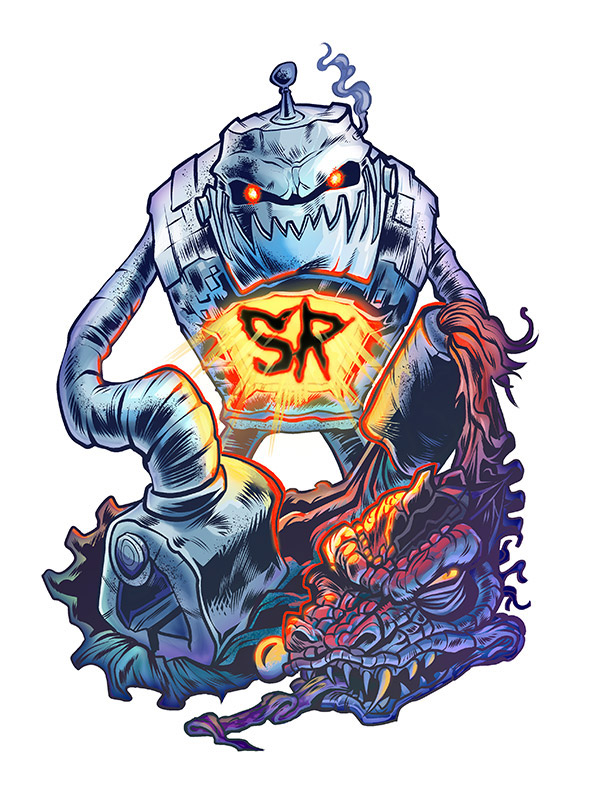 Silkscreen first, digital second. You can make art out of anything – so process is less interesting to that end, but if you are selling a product you have to go with the best output for a customer- right? So silkscreen wins for me if I sell a sticker – and digital is acceptable for free give aways in a pinch.

FLAC or gtfo! Also mp3 on the go, vinyl on the stay. 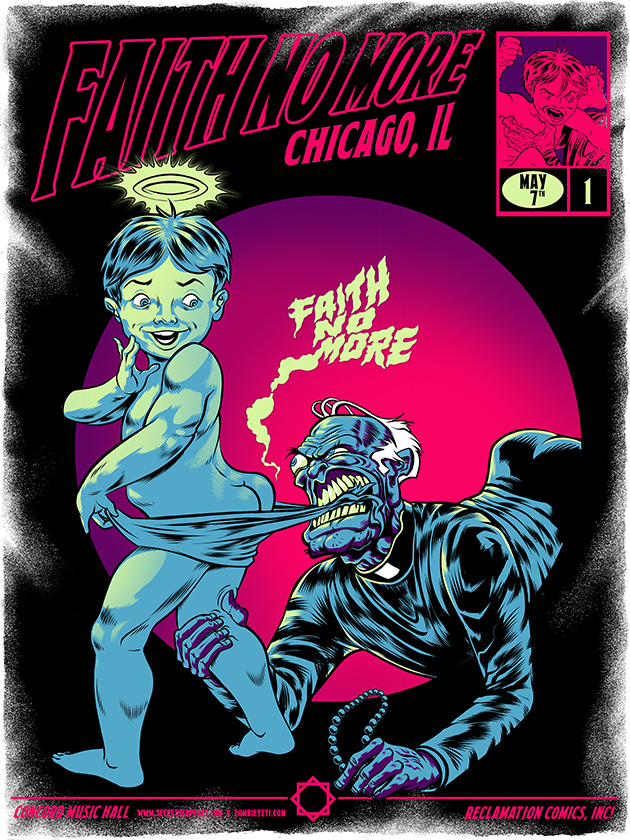 Read all the way? I have a nasty habit of not finishing most books I pick up. I had a project that pushed me to read this guide to drawing the clothed figure. It was interesting in the scientific break down of cloth and wrinkles as applied to gravity and force on varying geometric planes. I like that kind of stuff, but I never finished it. Moving forward all of my figures will be half clothed as a result…

First off, 3 is a pretty small number… just wanted to point that out. 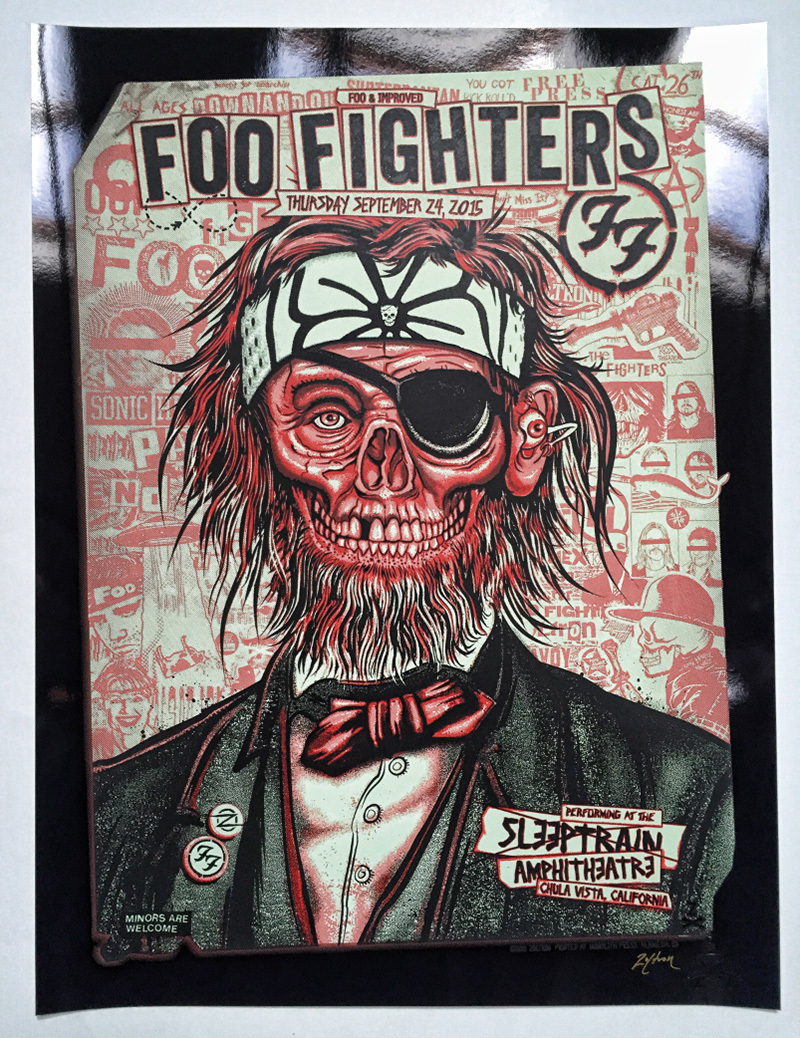 I was introduced to Zoltron by a childhood friend and superpro Illustrator/Designer, Joshua Smith aka Hydro74. And I confess – I actually do not like Zoltron. Instead, I love him like my cat loves licking his ass. That is to say, an effortless act of unaware athleticism that makes others around me uncomfortable… But seriously, the guy single handedly inspired me before I even knew I could be an illustrator, and then years later he actually gave me my first shot at a gig poster that put me on the map. So he’s kinda like my Obi Wan Kenobi, except he’s still alive and I believe he’d tell me if I was dangerously close to messing around with my sister…. but yeah, blame Zoltron for my existence in the art world.
While he and I have different approaches and strengths when it comes to the technical side of things, I think we have a few similar sensibilities and I can guarantee he’s seen all of my posters before they’ve been sep’d and off to press. So blame him or thank him. ;) 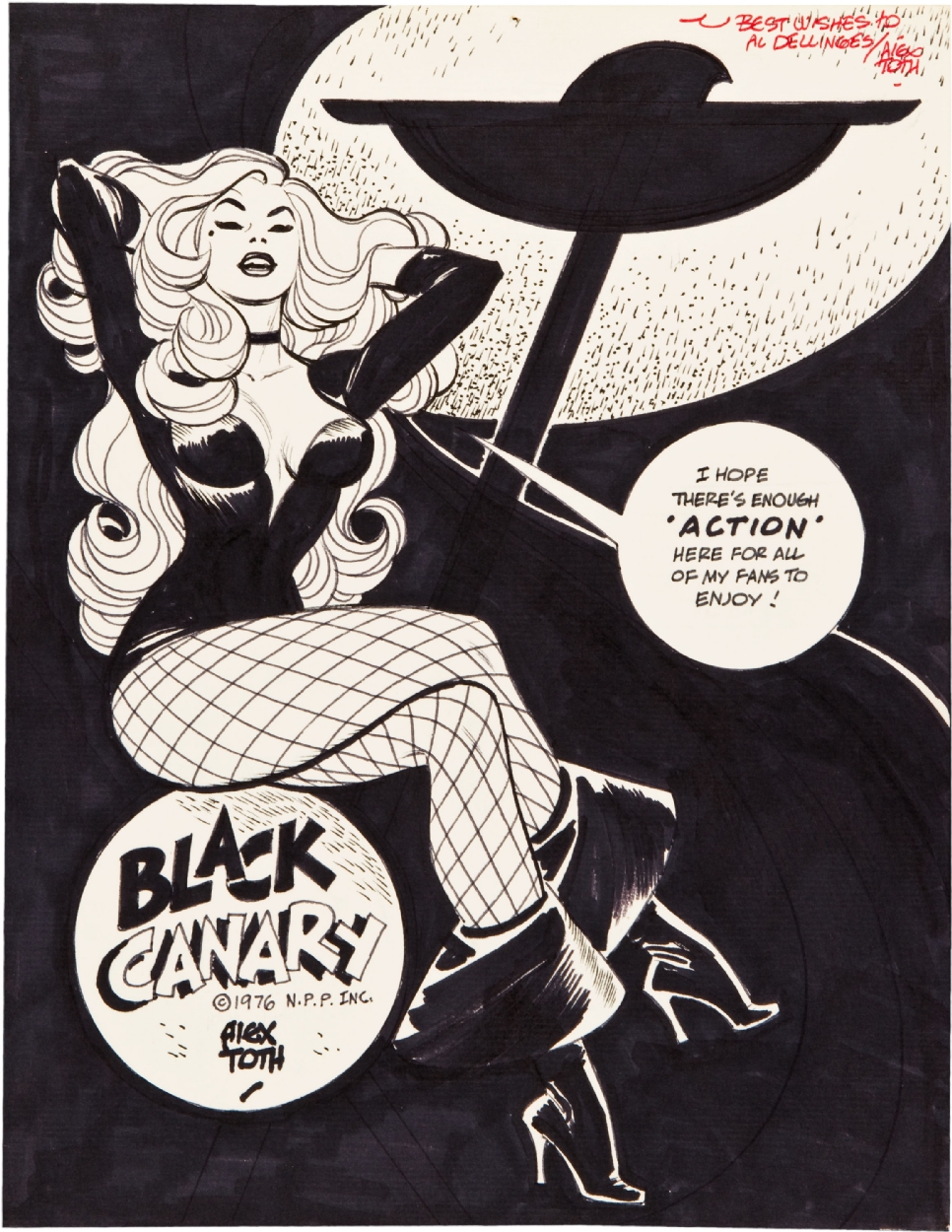 So while most kids were loving on Jack Kirby and John Romita at various times, I was lazily being raised by Alex Toth designs and limited Hanna Barberra animation at every chance. I confess my love of clean lines is directly from watching Super Friends first, and The Flintstones, Huckleberry Hound, Pixie & Dixie, et all, second, a young child.
I always admired the solid stiff linework I saw that managed to actually have an organic energetic personality even in still frames. I’d argue my perceptive use of line weight started from his subtle work translated by cel painters down the line.
Now, obviousiy Alex Toth really only handled the less cartoony stuff (Johnny Quest says hello), but the ethos was there during that era that was ingrained in my artistic desires.
I could go on for a long time discussing the good and bad of Hanna Barberas influence on animation (ie mostly bad in many ways) – but folks like Alex Toth elevated it and his work influences me to this day even when I’m not aware. 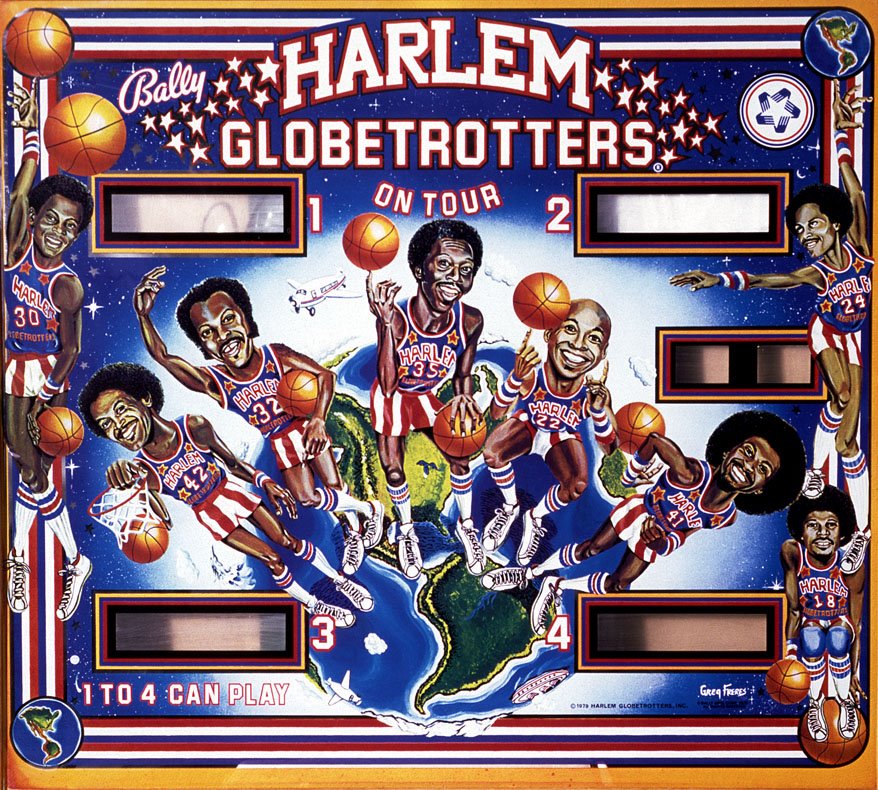 Greg Freres
I was fortunate enough to work with him late last year on Stern Pinball’s Ghostbusters Pinball. He’s a super chill pro and one of the best AD’s I’ve worked with.
He’s obviously a well known commodity in the pinball world, but for me, I also love that his work comes from the same energy and traditional craft of the low brow era that I love, along with an uncanny eye for practical and commercial work. His work is always fun and energetic with a genuine love for the source.
He’s an absolutely amazing designer and illustrator – a combo that isn’t always found in a singular artist, right? And I’d argue he’d have a perfect answer for any project. In short – he’s someone to study if you want to look for an original who’s underexposed and overly talented.

His talent and experience is what allowed and nurtured my efforts on the Ghostbusters project to be a success. Arty folks like myself are insecure babies by nature, and if they aren’t they are ego-maniacal cocks (can I say cock? I can? Great SEO work, Sticker Robot!) or they are simply outright liars. When you are in any project, your headspace is important so as not to loose the energy and inspiration, but to build on it like a downhill snowball or some such nonsensical analogy. To say that going into the Ghostbusters project was moderately intimidating is moderatly an understatement. So, as some AD’s use you like an applicable and replaceable tool, there are those mythical ones that support your individual uniqueness. He did the latter quite well, and the project was like working on a cloud getting massaged by rainbows while kicking puppies*.

(*Editors note: This statement supposes that kicking puppies would be a welcomed and enjoyable thing to do. Sticker Robot does not condone or support any acts on animals that involve feet.)

It’s hard to appreciate at this size, but I’m pretty happy with the end result #Ghostbusters translite #pro #Pinball 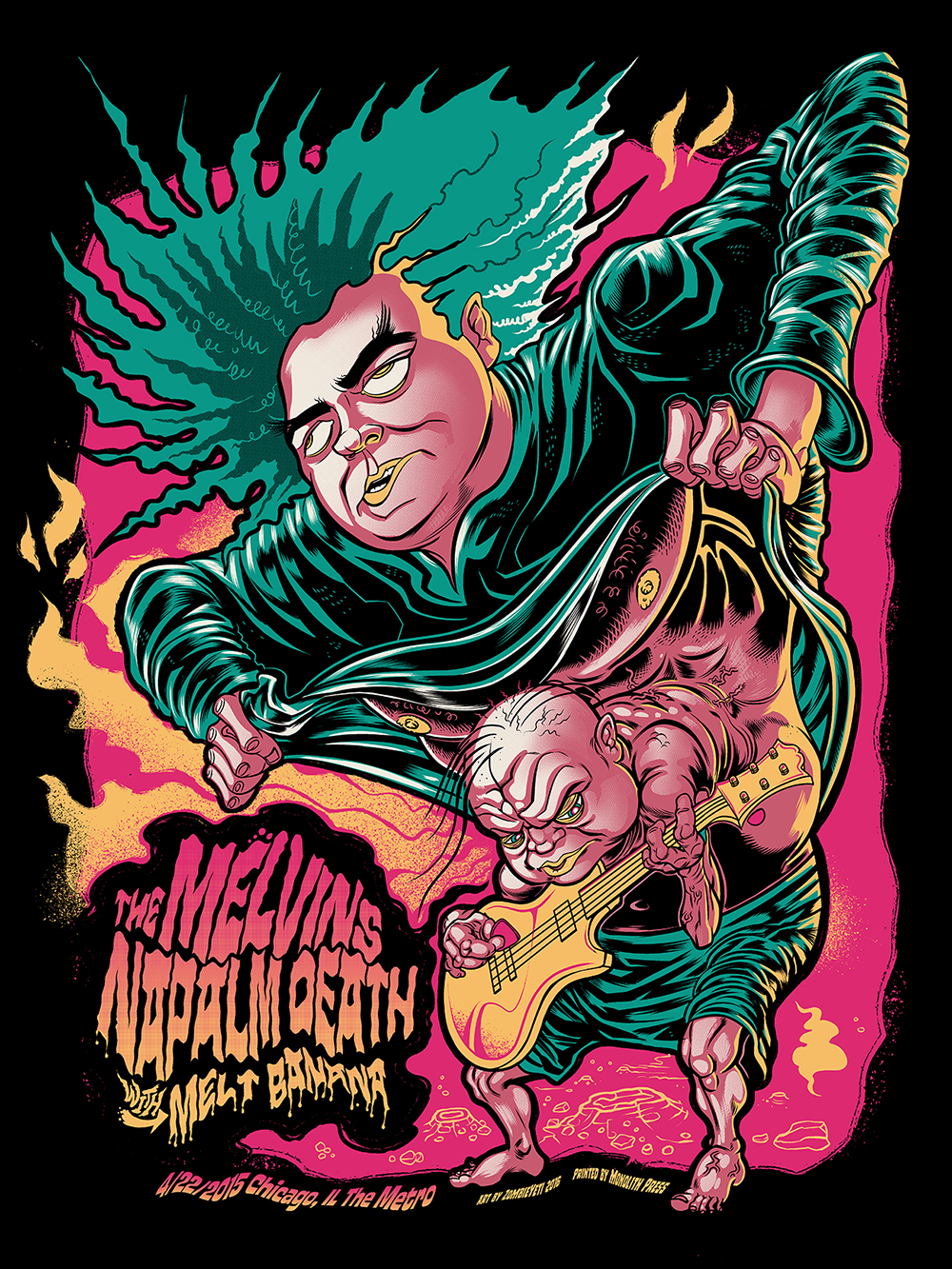 Well these days I seem to get secret projects I can’t talk about… or do I? I can’t really comment on that… or can I? No. No I can’t.

I am able to finally share what I was working on late last summer/fall which was Ghostbusters Pinball for Stern. That’s kinda exciting I think. And it’s apparently been well received because I’m prepping to work on another pin with the incredibly rad John Trudeau (Ghostbusters Designer). 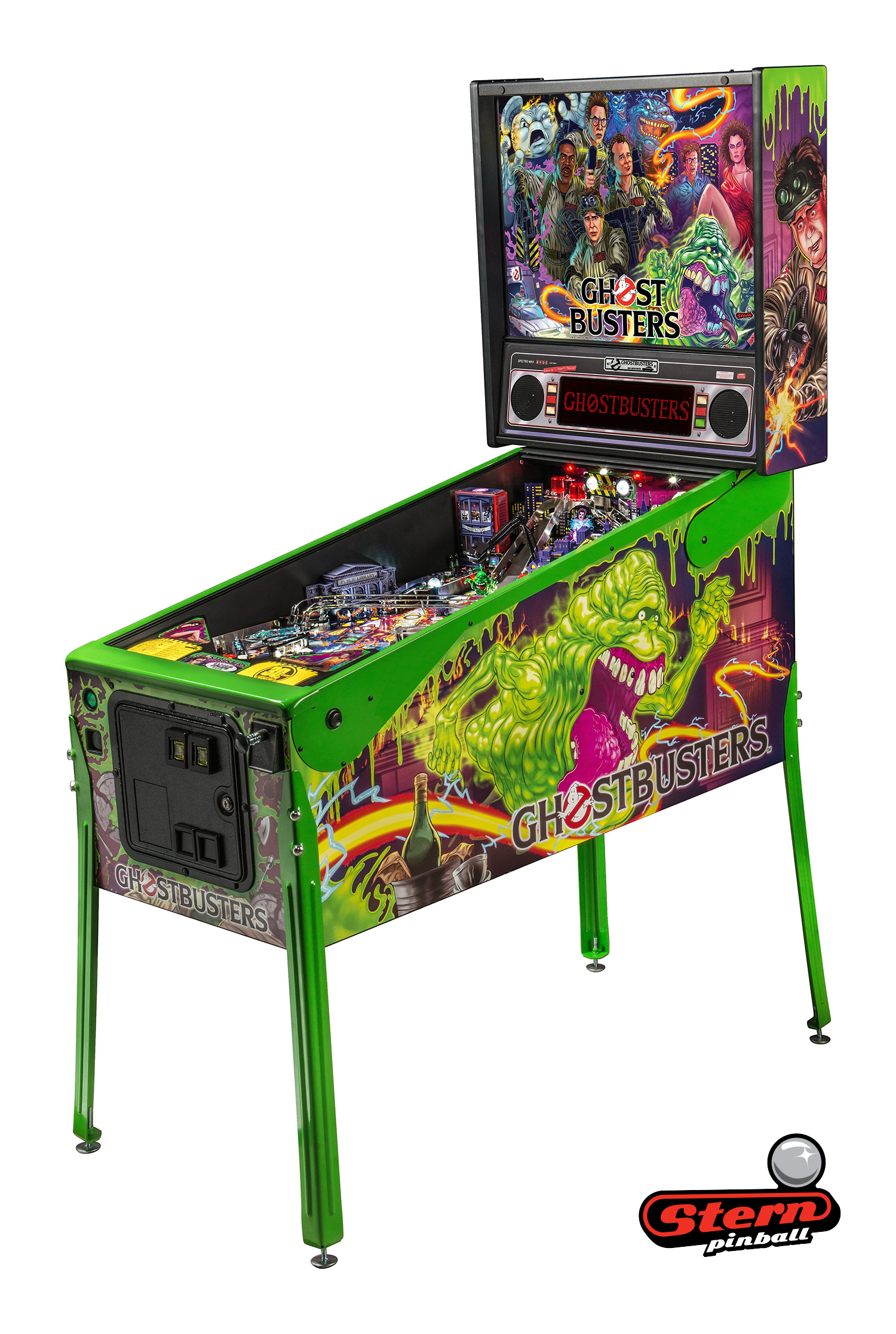 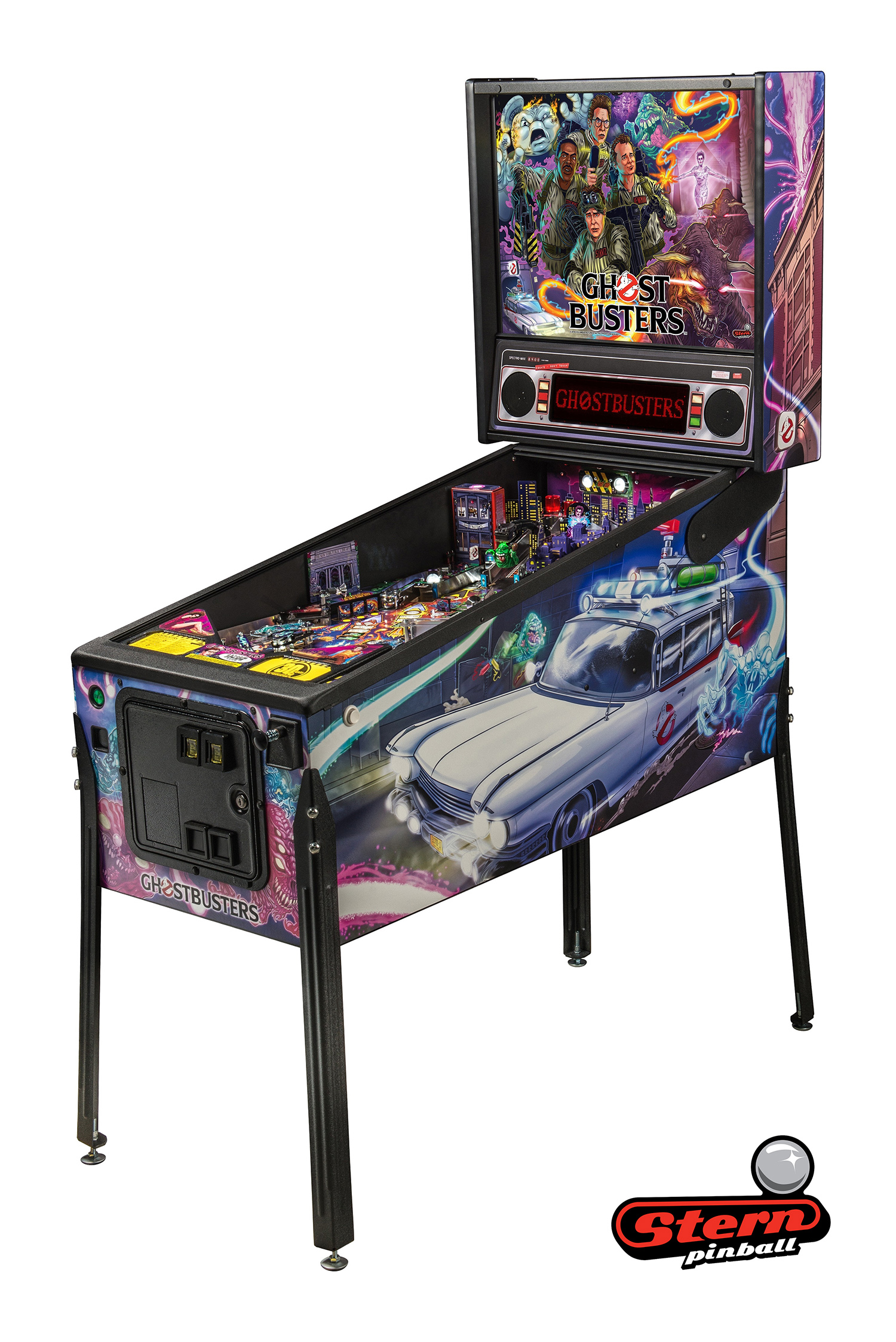 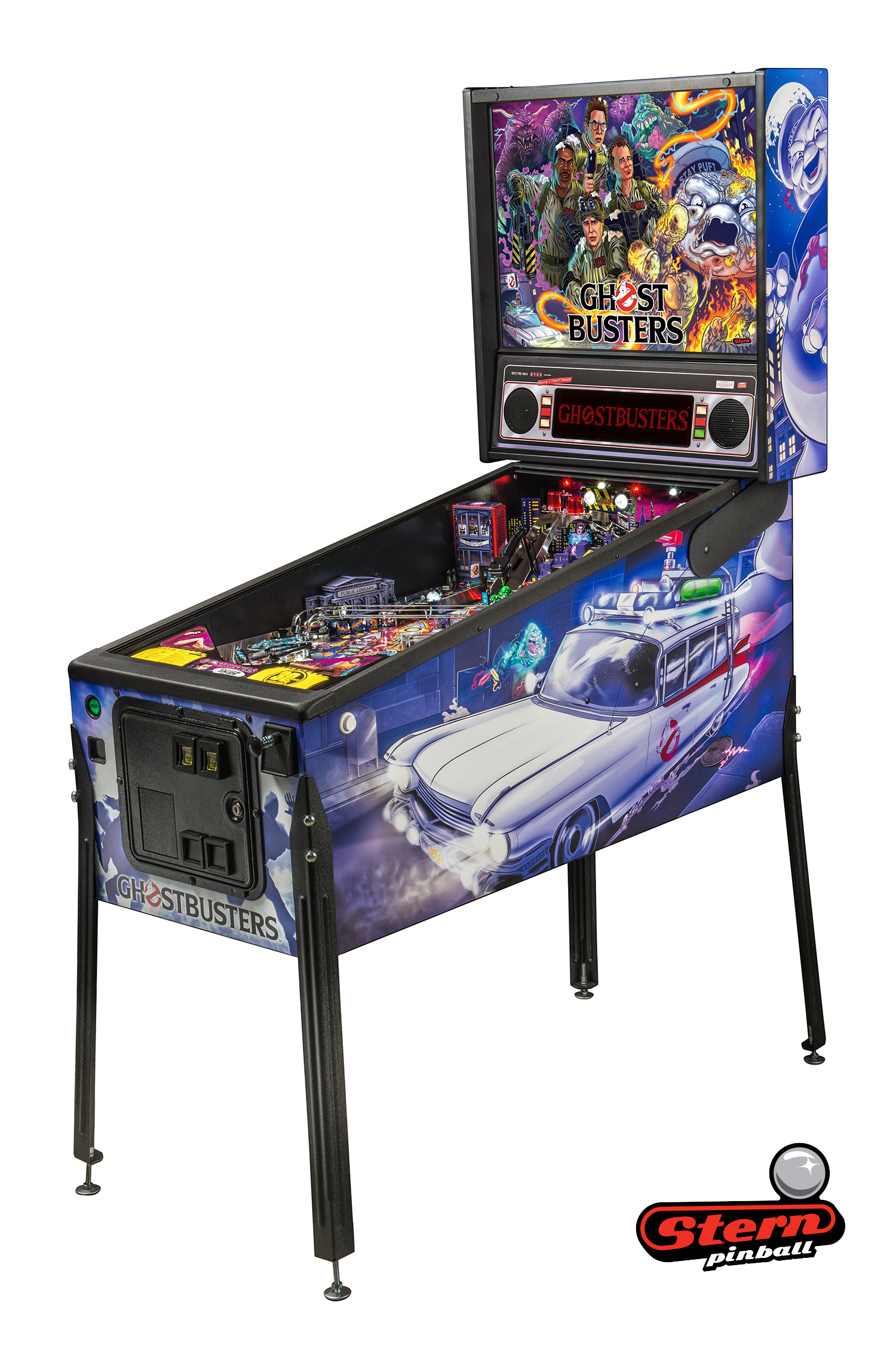 I’m not at liberty to say WHAT it will be, but I think it would be fine if I made up a jokey answer. SO I’ll announce exclusively that I am working on a Keebler Elves vs Scrubbing Bubbles themed pin!

While that will take a good amount of time, I will always make room for Gig Posters and other projects that challenge or excite me – so there’s that.

Because I can be. 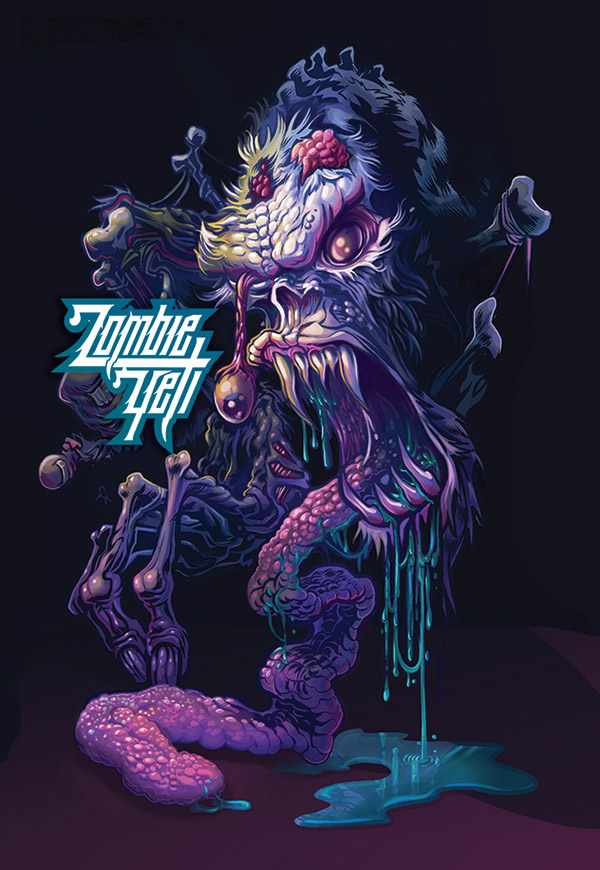