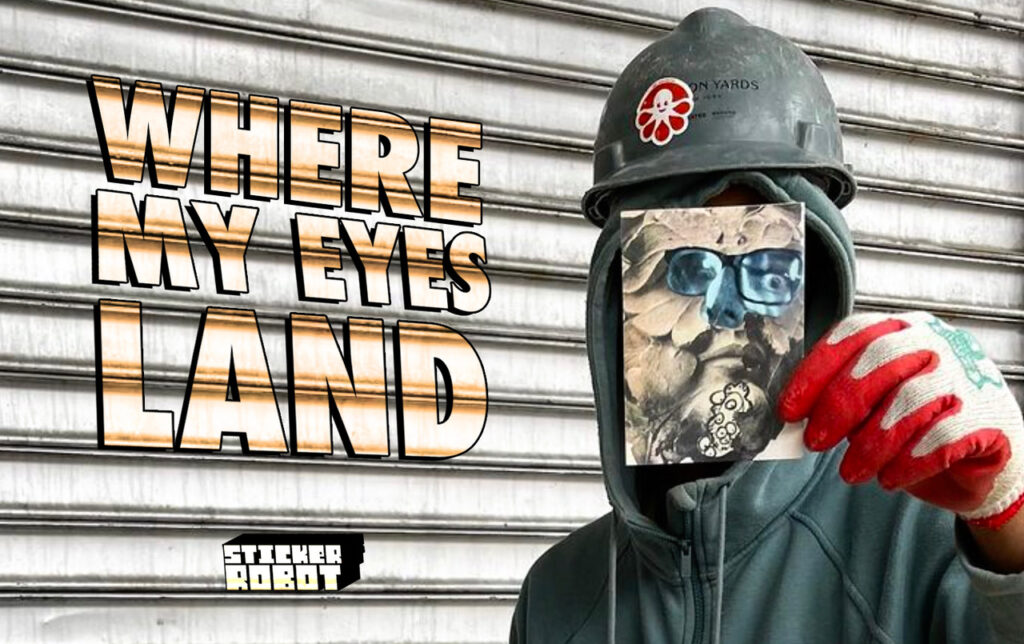 We’ve been printed up many a sticker for customer Philip DeMartino and its been hugely inspiring for us to follow his project online @wheremyeyesland.

Philip’s work is a collision of collage, street art and urban portraiture. And where a lot of sticker art is a strictly visual pursuit, @wheremyeyeland adds another dimension with the unexpected human connection that comes from photographing an anonymous stranger holding a sticker.

We were thrilled to ask Philip a few questions about his work. We hope you will enjoy his thoughtful answers below. 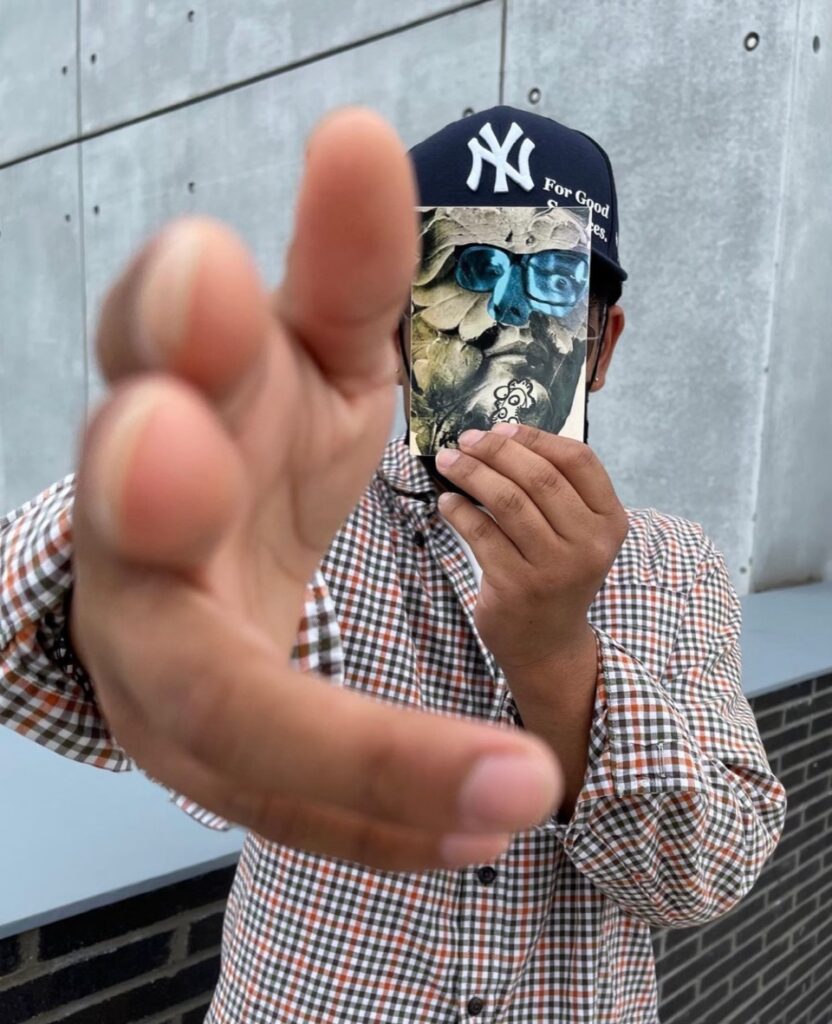 Q: Can you tell us a little about your (amazing) sticker project?

First let me say that I’m honored that you have taken an interest in what I have been doing with my sticker art and its underlying story. I am forever grateful to the team at Sticker Robot. The work that your entire team puts forth is nothing less than exceptional. Many many thanks for your excellence!

I first became interested in sticker slaps and stickers through photography. I documented my life and that of my family at first, but when my children became adults, I shifted toward street photography. As I walked the streets I noticed a proliferation of extremely creative sticker slaps. There was no aha moment, rather, over time it occurred to me that it would be fun and interesting if I created my own sticker and used that very sticker in my street photography. Photographing the sticker would in itself be an artistic pursuit and declaration.

A synthesis of favorite activities – walking, observing, exploring locations, capturing a moment – is what ultimately led to ‘wheremyeyesland’. 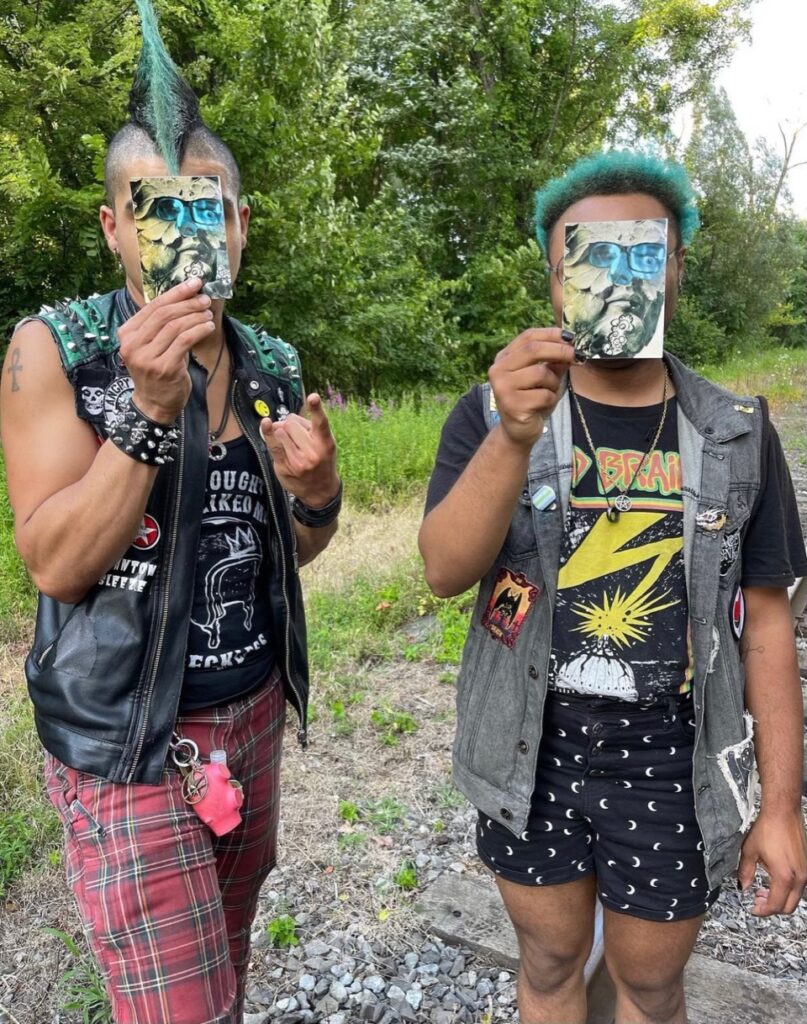 Q: How did you get started? Can you tell us more about the beautifully compelling artwork?

The sticker design came about rather quickly. I knew I wanted to incorporate my actual eyes. Living in the Hudson Valley (NY) has afforded me the opportunity to attend many artist and photographer talks. No matter who is speaking, the subject of seeing and observing with one’s own eyes is always mentioned as something necessary for a rich and creative life. I interpreted this to mean that one needs to know and understand one’s own point of view.

Enjoying a visual pun as I do, I quickly realized that if I am using an image which includes my actual eyes, and I am strategically placing it in a public space, then where-my-eyes-land would be an apt name for this new persona. The fact that the word ‘land’ is both a verb and a noun was also convenient. Eventually I unearthed an extremely old magazine, which had an extremely old image that became the foundation of the collage. I played around with some doodles for the goatee but eventually cut out the piece that became the goatee.

While going through this process I became aware that I was creating something that was going to have many levels to it. I didn’t want the label of self portrait being attached to the image, but I have always felt that by having the image out in public, I am creating a situation that says, I am bearing witness to the absurdity and bizarreness of contemporary life. I don’t expect the image to be read as a political statement, however, I do give myself the freedom to say that the streets belong to the public, and if my sticker can create the setting for an impromptu discussion, well then, let’s get talking.

“All Connections Are Equally Meaningful” 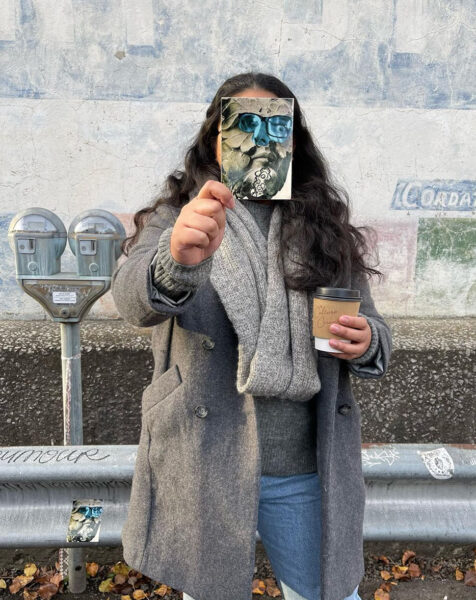 Dialogue is necessary and this is where Instagram becomes interesting. Immediately I gave myself the challenge of posting one pic a day. I was disciplined and had a long run of consecutive days posting an image with my sticker.

Eventually the challenge for myself became a question of how to continually present/post the sticker without becoming repetitive. I started using the phrase witnessing the copy as a hashtag because my experience with the sticker was becoming very meta. People who follow me would see the sticker in real life and they would often describe to me a Where’s Waldo World type of experience.

In other words, Instagram allowed for an interactive experience. There is nothing new or profound here; however, I did feel motivated to push myself and perhaps take the experience to another level. It was important to keep it entertaining for myself and those who seemed “mildly intrigued” by what I was doing. This is when “All Connections Are Equally Meaningful” enters the picture. 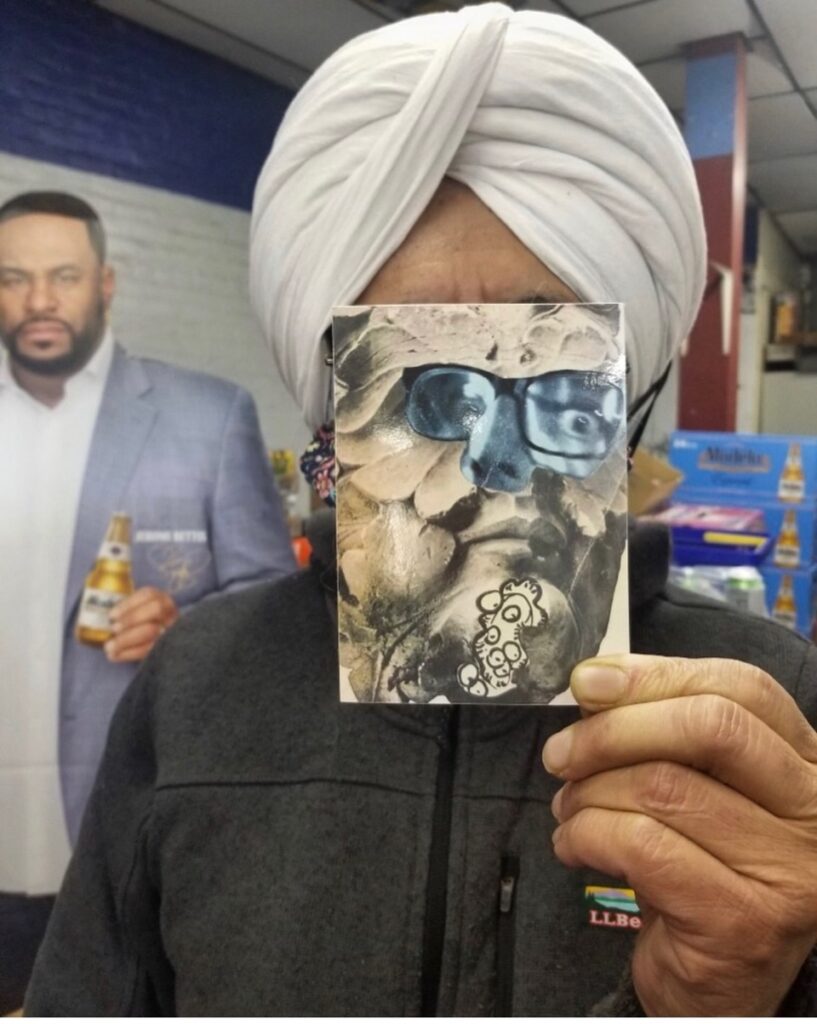 Q: What’s your go to question when you approach random strangers and ask them for a portrait?

The “Connections” series has been extremely rewarding and I can’t imagine a time when it will conclude. To my art world friends I describe the series as a documentation of mini “happenings”. When I approach people I try to create a first impression of playfulness. I am not phony about it because I do believe that the streets are a place of public theater. 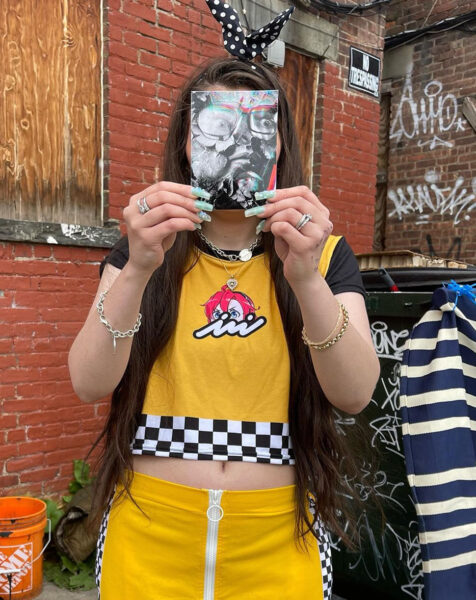 “… I introduce myself as a sticker artist and immediately show the sticker.”

I don’t have a “go to” question but something I consistently do is to introduce myself as a sticker artist and immediately show the sticker. This always taps into an individual’s curiosity. Often there’s something about the person that draws me to them. It may be a piece of colorful clothing or interesting body language. Other times I may be in a visually interesting location and someone appears who I think may be interested in participating. Every situation is unique and I think that’s what makes for a unique picture even though there’s the obvious repetition of the sticker. Regardless of what initiates the encounter, I am always honest about the detail that attracts my eye and I point out the color, pattern, light, or whatever it may be that made me feel drawn.This transparency establishes the sense that we are occupying the same space. Sometimes it’s overheard conversation, in which case I may interject myself into the conversation if appropriate. Regardless of how it is initiated, these experiences have taught me that people truly have a desire to connect. It’s human nature. It is energy – good old fashioned positive energy! 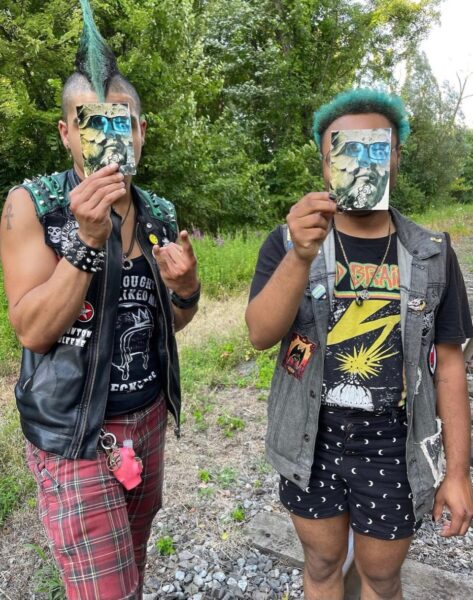 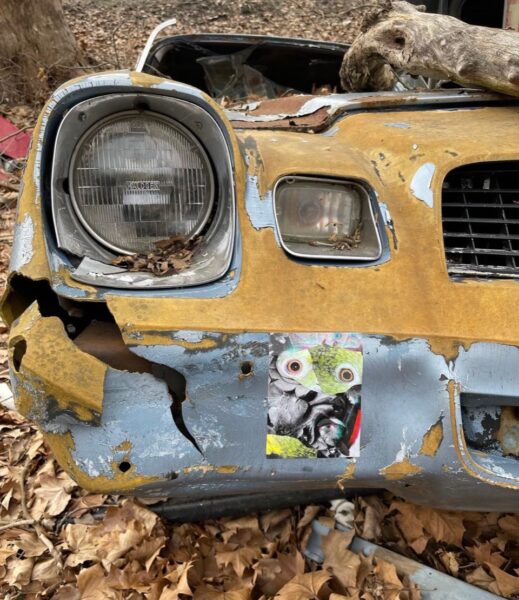 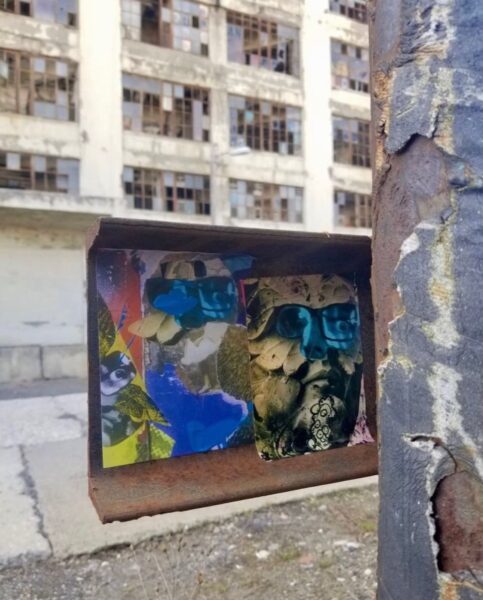 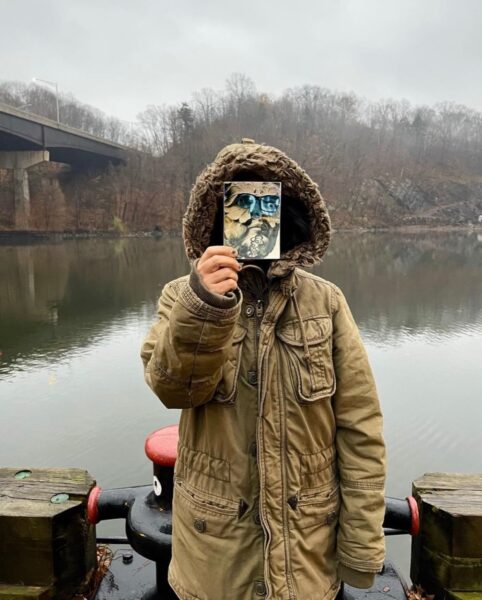 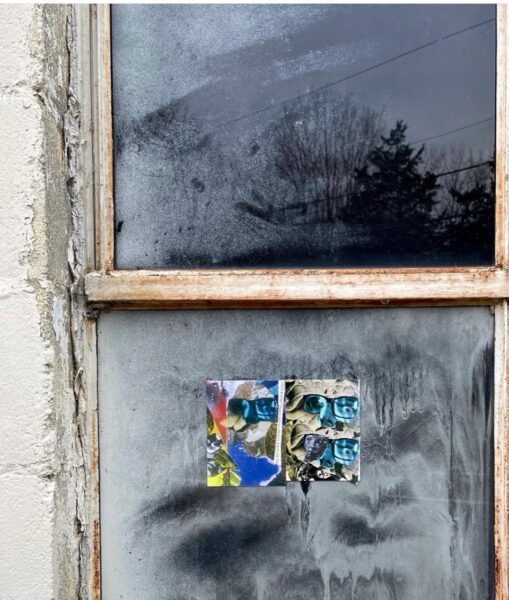 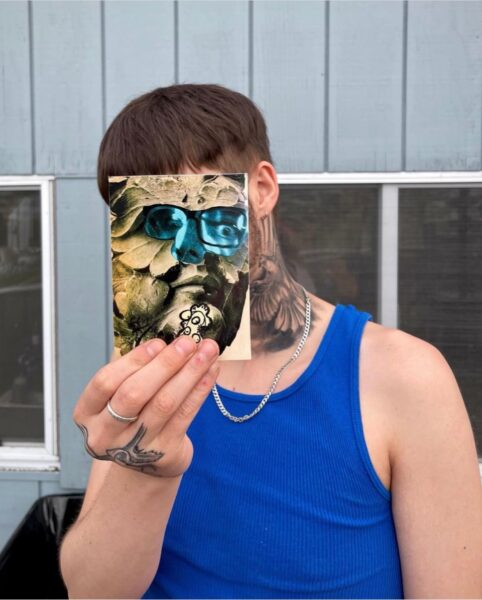 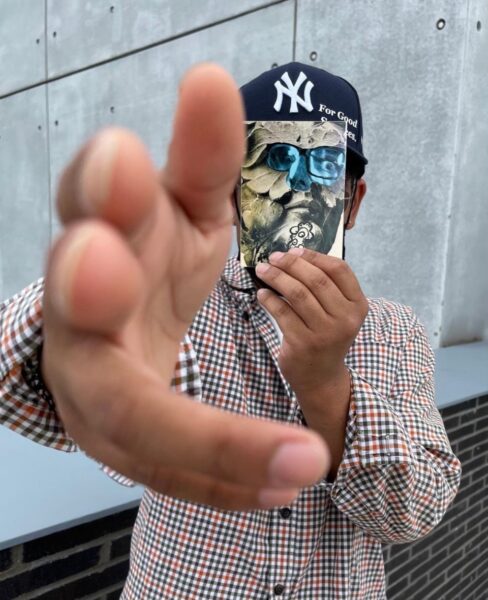 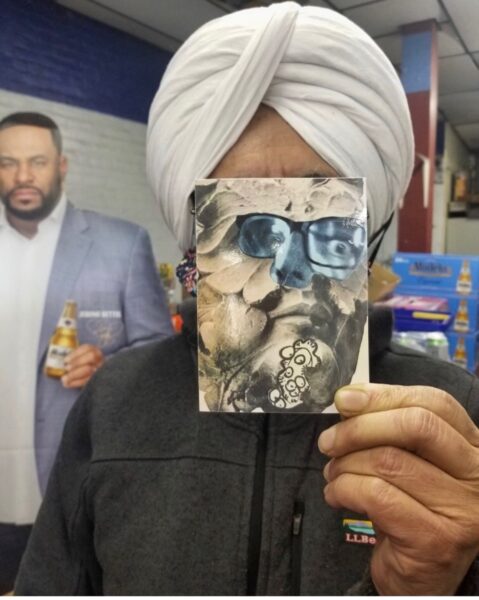 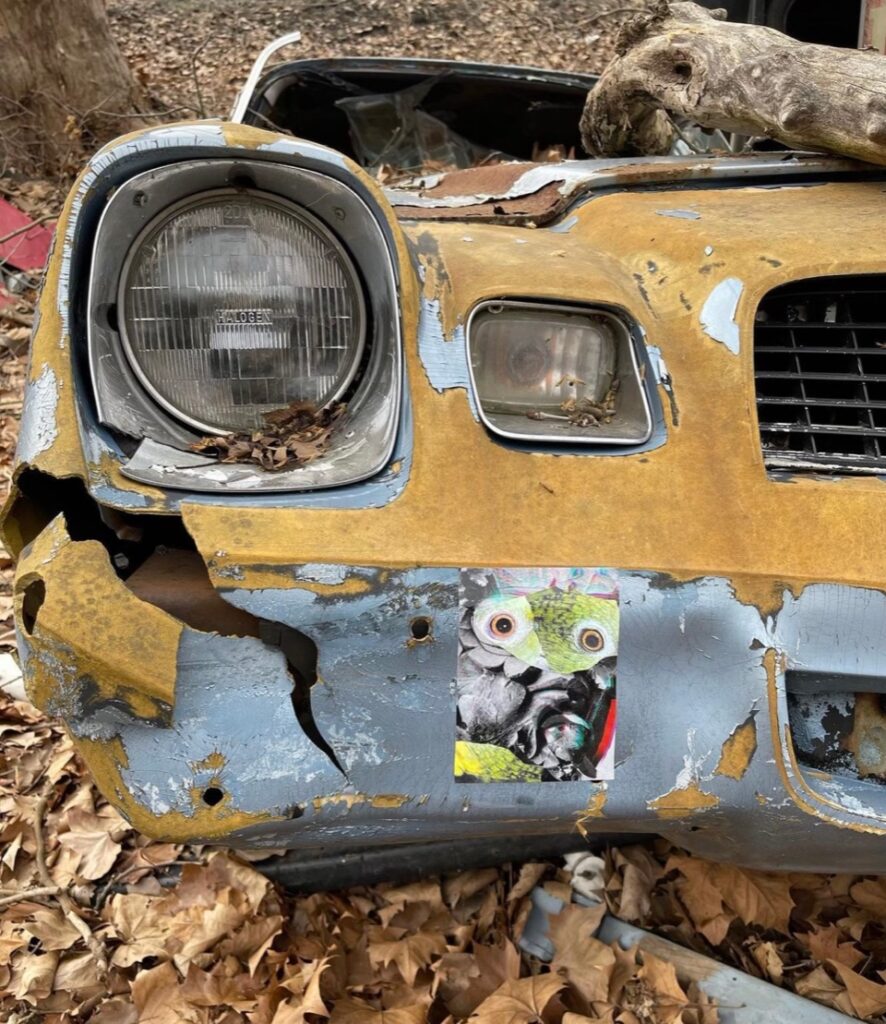 Q: Do you have a favorite photo/story that you’ve managed to capture of your work out in the world?

I sometimes am asked if I have a favorite story or picture. I like to paraphrase Imogen Cunningham and say that my favorite picture is the one I make next. I do however have a favorite story. While walking a trail along the Hudson River, I encountered and photographed a woman who was full of stories to share. She was a natural storyteller. Immediately I asked permission to record her talking and she began to entertain those who stopped to listen. It was a memorable moment. I am reminded of Robert Frank’s quote:

“There is one thing the photograph
must contain, the humanity of the moment.”

I often think of her while wishing that I would have the impetus to video the many “happenings” I encounter. I think about it a lot. If I eventually convince myself that a video capture can happen with the same spontaneity and authenticity as a still picture, then perhaps video captures will be next in the evolution of wheremyeyesland. In the meantime, I am satisfied being true to my hashtag, all-connections-are-equally-meaningful.

I say this with much gratitude to the people I have met, and will meet today, tomorrow, and the days after.