An Arizona High school English teacher named Tarah Ausburn put a Bumper Sticker on her Prius. In fact, all in all, Tarah put about 30 political bumper stickers on her Prius…. 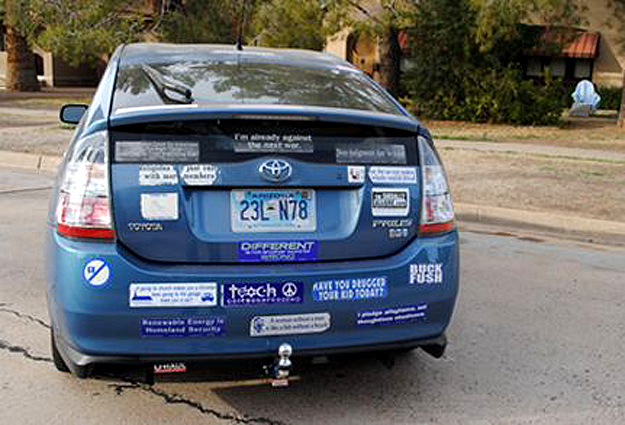 One of the stickers said, ‘Have you Drugged your Kid Today?’ It’s a clever parody of the infamous bumper sticker, “Have you Hugged your Kids Today ?” And It was her way of protesting what she claims is the overmedication of today’s children. (Go Tarah!)

So, after a couple of complaints from parents, (whose children were probably needlessly hopped up on Prozak) the school asked her to remove the offending bumper sticker.

She refused. And she was fired.

As for the offending sticker, “It’s kind of a criticism of us tending to over-medicate hyperactive kids who might not need those medications,” the English teacher told the local news “I just like the ability to take a controversial topic and sum it up in one clever line. I’m an English teacher; that’s what I do,” Ausburn added.

You couldn’t have said it better yourself, Tarah.

According to ex students, Ms Aushburn was an Amazing teacher. If and when the topic of her sticker covered car ever came up in the classroom, she simply replied that she likes to ‘express my opinions’.

Political Stickers are a great way to express opinions. But no one should be fired over a bumper sticker. Of course it’s debatable. Leave a comment below and let us know what you think…