Warning: If you are easily offended by a clown with semi-exposed nipples and beautifully composed oil paintings of scantily-clad blue aliens by world famous artists, stop reading now. If neither of these topics are cause for your moral concern… Please, read on.

Currently France is involved in an online censorship lawsuit with Facebook, involving a 149-year-old painting of a vagina by Gustave Courbet, a School Teacher’s subsequent suspension from Facebook, and a Social Media Empire that can not distinguish Pornography from Art.

Meanwhile, on the other side of the globe, a sticker image that we posted to our Facebook page resulted in a similar suspension.

Granted, a priceless century-and-a-half old painting vs. a custom sticker for a local T-shirt company might not fit into the same argument, but none the less, here’s a short story about sticker printing, sharing photos of clown nipples & social media censorship..

Exhibit A. The Offending Adhesive Contraband.

The clothing company’s most recent sticker project featured a rendition of the Creature from the Black Lagoon and a photoboooth graphic of a Topless Clown named Lexi Belle.

So, when they posted an image of their recent sticker bounty to instagram, we figured we would share it with our fans. After all, it is a highly effective sticker design – slightly promiscuous, but certainly a well designed, hi-impact sticker.

And more than anything else, a testament to our remarkable CMYK sticker printing process.

So we posted the photo on our blog and subsequently added the blog post to facebook. Of course, It’s certainly ok to dislike the sticker imagery. Promiscuity is not everyone’s cup of tea, but I wouldn’t expect anyone to make a big deal about it. Just move on. Continue with your day…. At least that’s what I would do, but then again I’ve spent a lot of time around nipples. As a newborn child, I was uncontrollably drawn to them. In fact, come to think of it… I love nipples. So maybe I’m biased. If you don’t like nipples, it should be easy enough to locate a photo of someones lunch or a video of a Norwegian car crash or something. Just keep browsing a little farther down the timeline and you will be confronted by a bowl of soup or a half eaten sandwhich.

If you follow us on Facebook, you are probably somewhat familiar with our creative aesthetic. We’re not perverse in any way, but of course we do have a slightly skewed filter through which we view the world. We have never before censored our creative or political opinions, so why start now? 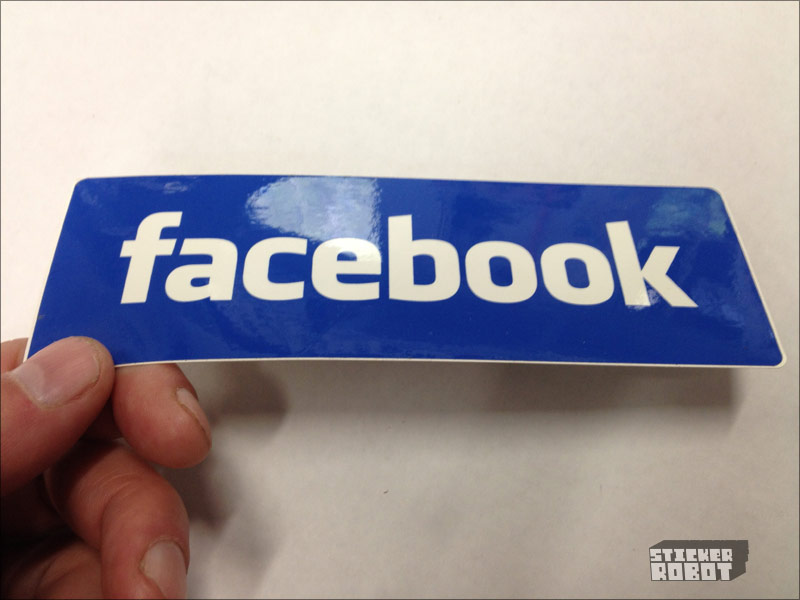 Now let us quickly interject by stating that aside from some minor privacy concerns, which we all seem to be voluntarily donating to advertisers with every click, we really like Facebook. From a business standpoint it’s a wonderful way for us to stay involved with our customers and the sticker community in general. From a personal standpoint, we are now in touch with all those old friends  that we came to love  over the years. We understand the fine line that this ginormous organization needs to walk in order to maintain order. Hell, Facebook is even one of our valued customers, with whom we have printed thousands of custom vinyl stickers. We certainly have a personal history and respect for this company.

That said, let’s get back to the story about how we got suspended and how one more nipple may spell our imminent downfall…

Well we hadn’t given the facebook post too much thought. Once we published the image, we went about our day…

5 minutes later, several dozen “likes” and some standard, run of the mill comments began pouring in like. Comments like, “I love clowns!” “Where can I get some Stickers?,” and  although the exact wording is now lost, at least one comment saying something like.. “Wait that’s a Silkscreen Sticker!!? How in the hell did you print it to make it look like a photograph!? Sticker Robot is run by creative geniuses!!” (Editor’s note: This last comment may or may not have actually happened.)

But, Suddenly… A single public complaint appeared, where the author tagged multiple people, in a slightly awkward attempt at creating public outrage. The “VUC” or “Very Upset Civilian” proceeded to scream in ALL CAPS, (that’s how we convey anger while facebooking.) demanding that all of their followers should promptly ban Sticker Robot based on principal, followed by a series of public and private whistle-blowing threats… “I’m gonna report you!!,”  “You’ll be sorry, Robot!” and “Never Again!!!”

Vinyl Stickers, Clowns Nipples and Maintaining Your Creative Integrity While Running a Business…

According to this single person and several of their “faithful” peers, the sticker in question was a vile and perverted PR stunt that we would “be sorry for.” Wow.. If my small brain could concoct such devious marketing ploys, I’d probably own my very own cable network by now.

Exhibit D. An Unedited Closeup Of The Offending Sticker Culprit Itself…

Even so, the positive responses far outweighed the negative ones and because of my personal disdain for censorship of any kind, I decided to leave the image of the sticker on facebook. Along with a friendly note explaining my opinion..

To me, this sticker was a good design and more importantly a testament to excellent screen printing. It was far less threatening to the morality of mankind than the people who were actively reporting our Facebook account made it out to be. Besides, what could possibly happen..? The Facebook police would simply remove it.. Right ?

Well, Sure enough… After a single complaint, 45 minutes later the image was removed, accompanied by this message… 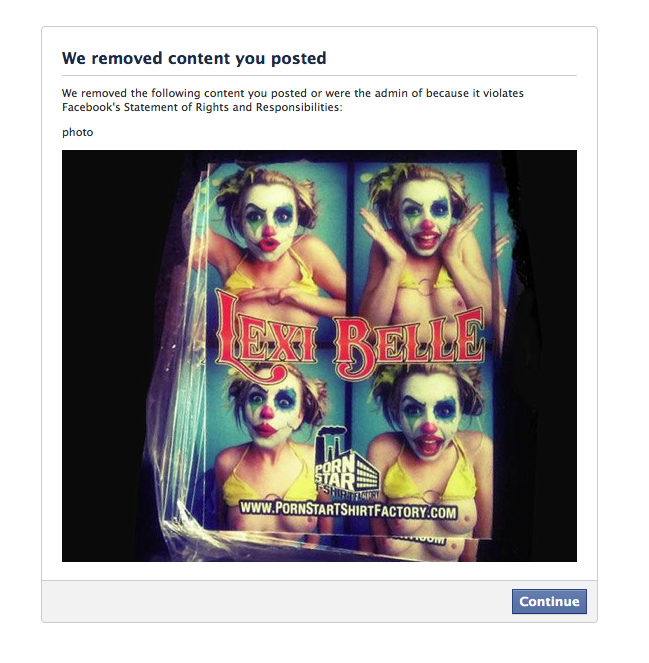 Nothing to See Here… Sentence Accepted.

Fair enough.. We were after all, as we sometimes do, slightly pushing the boundaries of Facebook’s legal terms. Who are we to argue with our agreed contract?

It’s true, even though most people have their very own set hidden beneath their shirts, nipples are against Facebook’s legal policy – and we did accept the policy agreement – so you could say we were asking for it… Oh well, what can you do ? It’s only fair. Let’s just get on with our days…

But when we tried to log in a second time, we were greeted with this unwelcome message.

What! An actual ban ? I’ve seen a lot worse than Clown Nipples on Facebook…

OK, that does seem a little extreme. I don’t think we were “abusing” anything. Testing the Boundaries… Maybe. But “Abusing..?” Harsh. I can see removing the content, but actually banning us and denying us access to the various personal and business related pages that we moderate, for showing a little too much Sensitive Lady Flesh?  Man… That’s tight.

But hey, like I said before. We have acknowledged our wrong doing and accepted our punishment. Maybe it’s a blessing in disguise. Now, for the first time in 7 months,  we can go outside, smell a flower, read a book (on our iPad) Pet a dog…

Then it dawned on us that the reason we were temporarily banned was that this was our “Second Offense!” So we began racking our brains, trying to figure out exactly how we violated Facebook’s terms in the past …

You see, aside from the occasional provocative Sticker Image, we are really very tame when it comes to posting offensive material. We have kids, jobs, parents – and for the most part, pretty good taste.. We’re sensitive to offensive material and respectful of other people’s opinions – and when it comes down to it, we’ve never been very big on shock art, or posting pictures of hot chicks in thongs, or scat films, or gory pictures of road kill.. So aside from a little political dissent, which we’ve been know to dabble in, we are actually quite safe for the most part.

But then it dawned on us that there was an image we posted one time, a few months back that was flagged as a violation. It was a poster that we proudly helped create and later posted on Facebook. The poster in question was made by a very famous artist named Ron English for a platinum selling band of musicians called Primus. We created the typography, procured the silkscreen printing and shipped the posters to their destination. And the day of the concert, we proudly posted it to Facebook.

Now keep in mind, this is a silkscreen poster. Silkscreen!  It was printed with 4 colors – Cyan, Magenta, Yellow and Black – which was faithfully reproduced  from a photograph of an original OIL PAINTING by Ron. It’s really hard to recreate an oil painting using only 4 colors & the result is nothing short of amazing. (Ironically the printer goes by the name, “Burlesque.”) But more than anything, there’s absolutely no doubt that this is a piece of art. It’s not porn. And in the face of all the crazy things happening in the world right now,  it certainly should not be deemed as offensive to anyone.

I’d be willing to buy a single share of Facebook stock, currently valued on the Nasdaq at somewhere around $175, in order to set forth a notion to the board of directors that we institute, on all 1 billion+ facebook profiles, a simple checkbox in our user settings that states, “Check this box if you are an adult. By doing so, you hereby certify that you are an intelligent human being, able to discern the difference between smut and art, and that you happen to come across a clown nipple or a thong-clad space alien, you are mature enough to handle it and won’t make a big fuss.”

What are your thoughts on Facebook’s Censoring policies ? Did we get what we deserved ? If somewhere down the line, we post a 3rd “Offensive” sticker, should we be permanently banned ?

Tell us your thoughts below. We’re adults. We can handle it.